The Dilemma of “Dreaming” 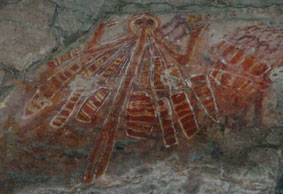 Christine Nicholls, researcher and curator at Flinders University, recently published a trio of articles on the website The Conversation (whose tagline is “academic rigor, journalistic flair”; I like that) concerning the problematic nature of the terms “the Dreaming” and “the Dreamtime.”

Rather than rehearse them here, I am simply going to recommend that you follow the links and read them for yourselves.  In the first piece, “‘Dreaming’ and ‘the Dreamtime’: an introduction,” Nicholls offers a brief critique of the terms’ inadequacies and notes the number of “closely affiliated ancillary vocabulary” terms, especially in Warlpiri, that add resonance and complexity to the concept expressed by the word jukurrpa.  She notes the wide range of terms in the numerous Indigenous languages that correspond to the Western Desert language variations on jukurrpa, and suggests that a broader use of these original words might benefit our comprehension by removing the misleading connotations of “dreams” from the concept as well as by forcing the non-Indigneous language speaker to confront the very difference that inheres in the concept.

The second piece, “‘Dreamtime’ and ‘The Dreaming’: who dreamed up these terms?,” she traces the origins of the terms back to Spencer and Gillen, through their adoption by A. P. Elkin, and to a kind of canonization in the work of W. E. H. Stanner (whose explicative “everywhen” would garner my vote for a substitute term, if such a transformative replacement were possible).  She notes the problems that are compounded by translation in European languages, where the word for “dream” is most commonly employed, without resort to the gerundive “Dreaming.”  (I will go here one farther and say that in my memory, a translation as “Dreamtime” is far more common, be it the French temps du rêve or the German Traumzeit.  Fascinatingly, the French Wikipedia glosses temps du rêve as “Tjukurpa en langue anangu“, while the German version references the “engl. Dreamtime oder Dreaming.“)  Nicholls also includes a discussion of one scholar’s solution for translating the term into Croatian, which provides an interesting look at strategies for introducing nuance.  Nicholls devotes  the rest of her second piece to explicating the concept, and ends by repeating her plea for English speakers to take up an Indigenous term in place of “the Dreaming.”

Such usage of Indigenous terms is relatively easy to undertake in specific contexts, where jukurrpa indicates a reference to Western Desert concepts, and specifically, perhaps to Warlpiri as distinct from tjukurrpa among the Pintupi.  Wangarr signals Yolngu meanings; ngarrankarni locates us in the Kimberley.  But what do we do when we speak of the concept in southeastern Australia?  What words do we employ if we wish to indicate a more generalized notion that applies across language groups?  Is there a good option in those cases?  I don’t know, and to be honest, I haven’t really thought about it before.  Such ticklings of my consciousness are one of the reasons I enjoyed Nicholls’s articles.

Perhaps we don’t even need a unitary word or phrase.  There are indeed plenty of English idioms that have been adapted to specific contexts.  We speak of law and business, of creation ancestors and creation time, of cosmologies and world views, of stories and myths and philosophies.  I am neither poet nor linguist, but I can imagine myself getting by quite nicely without ever saying “the Dreaming” again.  Perhaps it’s worth a try.

Nicholls’ third installment in the series was published this week, “‘Dreamings’ and dreaming narratives: what’s the relationship?”  This time around she looks at the connections between the stories told (for example, in contemporary paintings) and the country that they describe or are situated in.  Although once again focused largely on Warlpiri examples, this week’s article does offer a brief look at a story from Arnhem Land that concerns the proper preparation of the potentially deadly cycad-palm fruit.

Nicholls has aimed her essays at a general audience, quite appropriate for The Conversation.  Too often those of us who sleep and breathe Aboriginal art lose sight of the stunning degree of complexity these cultural issues involve and the subtleties that are often lost either in highly technical writing or in the souvenir-shop and wall-calendar marketplace for “Dreamings.”  Nicholls hits a middle ground, and for that we should be grateful.

Update: A fourth installment, explicating two paintings (by Yolngu painter Charlie Burarrwanga Matjuwi and Warlpiri artist Lily Hargreaves Nungurrayi) and their relation to country and ancestral stories, has now been published, and a fifth is alluded to.  Stay tuned to The Conversation.

This entry was posted in Art, Culture and tagged Language, The Dreaming. Bookmark the permalink.

2 Responses to The Dilemma of “Dreaming”