A Short Trip to Melbourne, Warmun, and Yirrkala 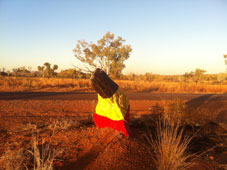 I’m a little short on time this weekend, so I’m going to punt and offer a selection of short topics that have been kicking about on my desktop recently.

The first is an alert to a wonderful new website/blog produced by Quentin Sprague.  Quentin is a curator currently working at the Ian Potter Museum at the University of Melbourne, which is where I saw him last, in the excellent company of Henry Skerritt and Joanna Bosse.  (We’d previously met when he was the arts coordinator at Jilamara Arts and Crafts on the Tiwi Islands six years ago, before he went off to work at Jirrawun Arts.)

Quentin’s current project is an exhibition called The World is not a Foreign Land, due to open at the Potter in March 2014.  In Quentin’s own words:

The world is not a foreign land is an exhibition that began in thinking about curatorial practice in relation to Indigenous contemporary art in Australia.

It traces a series of relationships between key artists from a number of geographically and culturally distinct regions of northern Australia: the Tiwi Islands, Eastern Arnhemland and the East and West Kimberley.

These relationships vary—some are explicit, others are more propositional.

The artists involved have been selected because I felt that the various relationships between their works and practices might, within this exhibition at least, suggest new ways of thinking. They include Timothy Cook, Djambawa Marawilli, Nyapanyapa Yunupingu and the late Kimberley painter Ngarra.

At one level the central relationships between specific artists are overlaid with established ways of ‘reading’ Indigenous contemporary art. By this I mean that they are bound to distinct regions, which is one way audiences have come to understand Indigenous practice in Australia.

But the project also aims to sketch another overiding frame (for looking and thinking) that will hopefully layer the exhibition’s potential meanings. This will be provided by the kinds of formal, material and poetic relationships that extend beyond easily articulated borders: the kind of tangential links that make art interesting. Feelings about how material objects relate in space and time will guide this line of thinking.

To date the project has drawn on research across the relevant regions—visits to art centres and artists, and broader conversations with many of the intermediaries that broker Indigenous contemporary art. These include art coordinators, linguists, gallerists, curators and writers.

There’s another question in here too, one that’s also worth considering in relation to curatorial practice. It extends along these lines:

As a culture, how do we collectively constitute Indigenous contemporary art?

Good question.  I’m enjoying Quentin’s work in progress and hope you’ll check it out for yourself.

About a month ago now, ABC Kimberly ran a short feature on the renowned Warmun artist Mabel Juli.  It’s one of the more delightful artist profiles and interviews I’ve seen, and if you click on the image below, you can enjoy it for yourself. 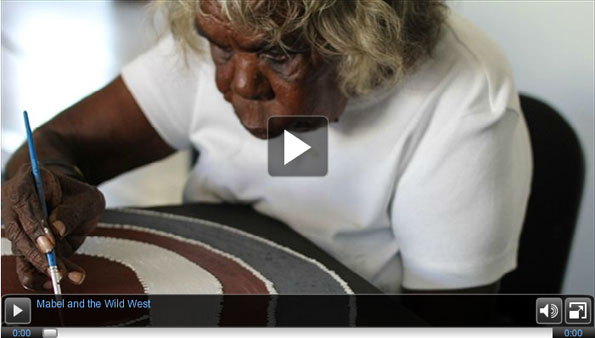 Finally, another brief video, this one from the Mulka Project at Buku-Larrnggay Mulka Centre in Yirrkala.  Directed by Rrawun Maymuru, it is, like many of the works coming out of the Mulka Project, part music video, part cultural reclamation action.  It’s meaning is opaque in my balanda context, but there are echoes of Macassan visits in the beautiful cinematography and all-too-brief glimpses of bunggul on the sandy beach.  I was also struck several times by the way the film captures so many aspects of Yolngu material culture, almost by default: the manufacture of the canoe, the brief picture of spear fishing, the variety of dress among the dancers, or even the way bubbles in the water circle the canoeists’ oars (they reminded me of Wanyubi Marika’s paintings of the arrival of the Djang’kawu at Yalangbara, although I’m pretty sure the reference is out of context here).  It’s a gentle and evocative journey into Yolngu culture.

2 Responses to A Short Trip to Melbourne, Warmun, and Yirrkala