Black Arm Band Premiers ‘Dirtsong’ in the US

Shellie Morris celebrated her birthday in style this year.  Along with other members of the Black Arm Band, Shellie was in Hanover, New Hampshire, at Dartmouth College, to present the US premier of their third major production, dirtsong.  Immediately after the impeccable performance, several members of the band took seats at the edge of the stage to answer questions from an audience that had just awarded them a standing ovation.  The group’s leader, singer Lou Bennett, had just started to answer the first question when the rest of the band emerged from the wings carrying a birthday cake.  Everyone joined in a chorus of “Happy Birthday” before the surprised and delighted Shellie blew out the candles to cheers from all present. 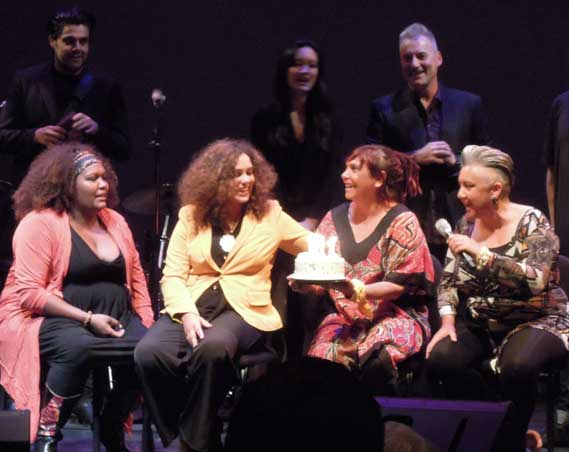 Birthday or not, there was plenty of cause to celebrate.  The venue, Dartmouth College’s Hopkins Center for the Arts, is celebrating its 50th anniversary.  The performance was supported by the Hood Museum of Art along with the Departments of Native American Studies and Anthropology.  Stephen Gilchrist, the Hood’s Curator of Australian Aboriginal Art, had arranged to bring the Black Arm Band to Dartmouth in conjunction with the exhibition Crossing Cultures, now entering its final weeks of a six-month run.  The College and the community’s embrace of Indigenous Australian art and culture has been nothing short of staggering, and there could hardly have been a better and more appropriate and festive way to celebrate that fact than the performance the Black Arm Band treated us to on the evening of February 20th.

Dirtsong follows two earlier productions by the Indigenous supergroup, which is now, according to Lou Bennett, more than a band: it’s a bona fide theater company.  The group had its genesis in a conversation between Bennett and artistic director Steven Richardson, who expressed disappointment that there was no contemporary Indigenous orchestra, and there were no classically trained Indigenous musicians performing in Australia.  Instead, many of the greatest singers and musicians in the country came together in 2006 to create Murundak, in which the performers brought their own songs of protest together to tour Australia.  That was followed in 2008 by Hidden Republic, in which about 30 members of the Band and another 30 members of the Melbourne Symphony Orchestra came together to perform songs of hope and to try to create that orchestral vision.

A year later dirtsong debuted at the Melbourne Festival, and the theme this time is language and country and the connection between the two.  A collection of songs from the likes of Ruby Hunter, Paul Kelly and Kev Caromdy, Neil Murray, and Shane Howard were melded with original compositions by the featured female vocalists (Bennett, Morris, Emma Donovan and Deline Briscoe) that set to music selections from Alexis Wright’s magisterial novel Carpentaria.  Wright’s words were translated into the native languages of the singers’ countries for the performance.  The whole was enhanced by video footage illustrating connections to country, much of it filmed by Natasha Gadd and Rhys Graham during the filming of the documentary Murundak, which captured the company’s tour of Australia with that show.

The performance at Dartmouth began, fittingly, with a welcome to country on behalf of the traditional custodians, the Abenaki.  A member of the Iroquois Nation offered a blessing, an invocation to the primal elements of water, earth, air, and fire, and then the Black Arm Band took the stage. 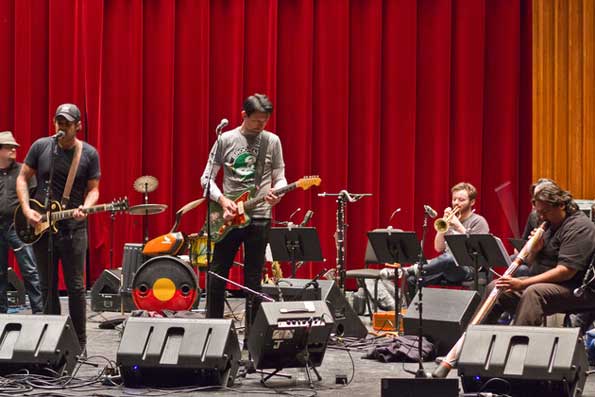 And what a show they put on!  It is not, like Murundak, simply a compendium of songs.  The entire production is clearly scripted and rehearsed, down to the women’s hand movements as they join in a chorus or fade into the background.  And yet there seems to be a remarkable flexibility to the ensemble.  Djolpa McKenzie was scheduled to appear at Dartmouth, but was unable to perform and his songs were taken over by Emma Donovan or Dan Sultan–but if the program hadn’t indicated otherwise, I would never have known of the changes.  And though the songs come from different sources–some written expressly for the show, others adopted from films or recordings–there is a harmony and coherence to the sound that makes it, along with the video backdrop–something much more that a concert.  It has elements of cabaret and song-cycle and chamber music.  It is virtuosic and gripping; for long periods I simply forgot to maintain a critical distance and got caught up in the sound, the atmosphere, and the performance.  There were times when I was focused so intently on a singer that I suddenly realized a narrative was being literally written across the screen behind them; other times when I was caught up in the kaleidoscope of imagery, of faces and bodies and city views that swept above and behind the singers.  It is artful and artless, by turns invigorating and restful.  In short, dirtsong turns out to be a splendid work of art, unified by a vision and a structure that is subtle and unintrusive.

Dirtsong is comprised of five “episodes” that follow the narrative structure of Carpentaria.  The first is the eponymous and haunting ‘dirtsong,’ which opened with Emma Donovan singing “Far Away Home/Gungalaira” in English and Bundjalung, a song taken from Rolf de Heer’s film The Tracker.  Lou Bennett took the lead in singing “dirtsong” in Yorta Yorta, with support from the other women.  As the last strains faded away, master didj artist William Barton performed a solo called “Coming Up Close Now” that had the audience gasping with admiration by the time he finished.

The second episode, “Big Law,” opened with Shellie Morris’s “Rainstorm,” and closed with Shane Howard’s “Waakoobawhan Yannak,” led by Dan Sultan.  In between, the performance shifted into a more raucous mode with another instrumental, “I Am Not Your Way.”  This number started off with Dan Sultan constructing a bush drum kit out of the fuel tank from a motorcycle, a shovel, a thirty-gallon rubber bucket for a bass tom-tom, and a pair of cymbals fashioned from a hubcap and what looked like a disc brake.  Sultan and the band’s backing drummer traded riffs for a few minutes before being joined on a variety of improvised percussion instruments and clapsticks by the entire ensemble.  Video of young kids dancing wildly at the Garma Festival played on the screen, and by the end of the piece everyone on stage was stomping and swaying and the crowd was making a truly joyful noise.

“Heartbeat,” the third episode, may have been the loveliest moment of the evening.  Emma Donovan’s “Gidany,” sung in Gumbayngirr, bracketed a soft and moving rendition of Ruby Hunter’s “Yarian Mi Tji (What’s My Name).”  You can get a taste of what this was like from a video I posted a couple of months ago soon after learning that the Band was coming to the US.

The fourth episode, “Side by Side,” made an implicit assertion that English is also an Aboriginal language.  Paul Dempsey, vocalist and guitar player from Melbourne’s award-winning rock band Something for Kate, stepped up to the mike–where he was soon joined by Dan Sultan–to perform “This Land is Mine/This Land is Me.”  Written by Paul Kelly and Kev Carmody for Rachel Perkins’ astonishing short film One Night the Moon (2001), the song is a powerful statement about possession and belonging.  Sultan then took center stage to perform “Old Fitzroy” from his second album, Get Out While You Can.  The bluesy country tune is steeped in sorrow and Emma Donovan’s amazing backing vocal was laced with pain and yet also with a sense of determination and survival.  The accompanying video of Melbourne’s motley denizens was another of the visual highlights of the evening.

Episode Five, “Rainstorm,” was more subdued but no less powerful.  “Rrawa” featured another brilliant performance by William Barton and the instrumental backing band.  Emma Donovan took the lead on “Dron Wanga,” the Gumatj language version of “My Island Home” that G. R. Burrarrwanga first recorded on his solo album Nerbu Message in 2004.  She switched to English for the final chorus and had everyone (me included) singing along by the end.  Deline Briscoe got the spotlight for “Big Law,” the final song of the evening that was adapted from Alexis Wright’s Carpentaria.  Her singing was impassioned and almost operatic in the heights she reached.  The performance ended with a reprise of the first song, “Gungalaira,” to remind us just how far we’d traveled in a very short time. 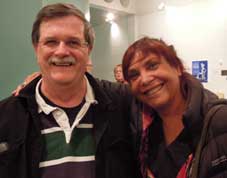 Lou Bennett took this snap of me with Shellie Morris

The audience Q&A session–and the birthday cake–followed after a brief pause, and then many members of the band and audience trooped upstairs for a short reception.  Bruce Duthu, chair of Dartmouth’s program in Native American studies, thanked the band members who had, in addition to the performance, been guest lecturing in classes on campus and clearly winning hearts everywhere they went.  And indeed, their generosity was well displayed that night; no one showed any signs of the jet lag they must have been feeling, or any trepidation about a departure the next morning at 6:30 for New York City, where they performed again on Friday night at New York University’s Skirball Center for the Performing Arts.  Instead, we had the chance for extended conversation, and the band patiently answered more questions.  I chatted with Lou Bennett about the Band’s history, compared the music scene in Cairns (dreadful) and Melbourne (much better) with Deline Briscoe, and shook William Barton’s hand.  And got my photograph taken with Shellie Morris, a warm and most delightful woman, on her birthday.  It was a fabulous night.

Finally, for a look at some of the video that accompanied the performance, check out this video of dirtsong.

2 Responses to Black Arm Band Premiers ‘Dirtsong’ in the US