Well, from the farthest shores of America, I have to say I’m pretty stoked about this year’s National Aboriginal and Torres Strait Islander Art Awards.

Let’s start with the prize winners.  The biggest and the best news for me is Djirrirra Wunungmurra’s selection for the bark painting award.  This is totally partisan, totally personal.  I’ve just loved her work from the first days I set eyes on it.  People with a fondness for Yolngu art from Yirrkala have an equal fondness for discussing an artist’s “hand,” the skill he or she brings to the laying down of ancestral designs, and there are few who would argue that Djirrirra has one of the finest hands in the country.  Not surprising, given that she learned her craft from her father Yanggarriny.  In a way, you could say that this is Djirrirra’s second appearance in the winner’s circle, as she assisted Yanggarriny with the work that won the overall prize in 1997.  For many years Djirrirra painted the fishtrap design (buyku) associated with country around Gangan; several years ago, however, a member of her family contested her rights to that design.  In response, she changed gears and began painting Yukuwa, which is one of her personal names, as well as that of the yam pictured in her prize-winner. (It’s worth noting that she has resumed painting buyku, and indeed entered an incised version of it in last year’s award.)

Yukuwa is a yam whose annual reappearance is a metaphor for the increase and renewal of the people and their land. Traditionally the invitation to such a ceremony is presented as an object in the form of a yam with strings emanating from it with feathered flowers at the end. This is a suggestion of the kinship lines which tie the group together (Buku-Larrnggay Mulka Centre).

It’s always delighted me that she responded to a challenge by asserting her personal identity, but doing so with imagery that asserts the connectedness of kin at the same time.  The subtlety and wit of that strategy is matched for me only by the sheer beauty and delicacy of the designs themselves.  Finally, the contrast between the strict geometry of the buyku fishtrap design and the flowing, organic lines of yukuwa is a delight in itself, the kind of complementarity that is the essence of Yolngu thought.  If there were nothing else to rejoice in this year, this award would suffice for me.

But there’s much more, and to continue in the vein of the personal and idiosyncratic, I’m nearly as thrilled to see Jack Nawilil win the 3D prize. I first encountered his work about 10 years ago through Maningrida Arts and Culture, who were presenting paperbark “bone bundles” crafted by Nawilil–shrouds that were originally made as the final housing for remains of the deceased.  The creation of such bone bundles are works of art dates back at least 30 years, reputedly first done by the great Crusoe Kuningbal; Brian Njinawanga also made them, and several examples of his work were included in the Eye of the Storm exhibition and catalog in 1996.  Namorroddo, this year’s winner, has the same sense or aura of an almost unmediated ceremonial object, the roughness of its wrapped and painted surfaces an index of the spirit’s strength.  Namorroddo, associated with the shooting star is a fearful presence in the night, and it takes a powerful sorcerer to protect against him.  Any object that appears in the NATSIAA is obviously an object of engagement with the marketplace, but Nawilil’s sculpture seem to arrive at the agora straight from some place very deep in the bush and the psyche; powerful and primal, Namorroddo is a simple and disturbing creation.

And if we postulate even an artificial continuum from the primal to the postmodern, then it would be hard to choose another work from this year’s field to better exemplify the ironic and political sensibility than Raymond Zada’s racebook.  And hard to find one that’s more relevant at this very moment in time.  The annotation to Zada’s winning entry references two Facebook groups dedicated to promulgating racist commentary on Aboriginal people that were in play months ago when Zada created this piece.  Sadly, the passage of time has not reduced the work’s topicality.  The “Aboriginal Memes” that have been plaguing the site in recent weeks are still going strong: in fact, a new set of these memes was started up since I began writing this post less than an hour ago.  Another, which apparently started about the time that Zada’s win was announced, states “This page is satire.   GTFO out if you’re offended.”  Nice, huh?  They also feature plenty of whining about earlier incarnations of this offensive crap being banned or access within Australia restricted.  I’m pleased to hear that MAGNT has acquired Zada’s winning entry, and that another print is going to the NGA.  I hope they’re both put on permanent display.  Good on ya, Raymond!

I am no less delighted to see Timothy Cook win the overall prize for another brilliant rendition of Kulama and to see Barbara Mbitjana Moore recognized for her new experiments with color and yet another innovative adventure in composition from Tjala Arts, which seems to have no end of fresh new ideas.  I hear, too, that the phone has been ringing off the hook at Outstation Gallery, where another half dozen of Moore’s paintings are included in the new exhibition that opened this weekend.  All in all, it’s a field of winners that does everyone proud. 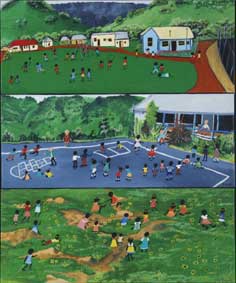 Outside the winner’s circle, I have a pretty crowded field of personal favorites this year as well, which consoles me for the overall smallish size of the hang for the second year running.  In the painting category alone I’m hard pressed to decide what I might nominate in the People’s Choice Award.  Margaret Gudumurrkuwuy Ganambarr’s Bush Tucker Story from Galiwn’ku reminds me all at once of the most disparate antecedents (none of which were probably in the artist’s mind): Djardie Ashley’s paintings of the speartip quarries of the Stone Country, Robert Campbell Jnr’s evocations of pre-contact hunting and fishing trips, and Lucy Wanapuyngu’s Highly Commended entry from last year, Healthy Food from the Past.  Pauline Moran has returned to color pictures of the past again with a triple vision of mission days in the 1950’s; I’ve loved these idylls of hers since I first saw them in the 2008 award show.  And speaking of color,  the delicacy of Sally Gabori’s daughter Elsie’s painting My Mum’s Country has great appeal.  (Does this work remind anyone else of Sonia Delaunay?)

And there’s wonderful men’s business in the painting category this year too.  Hector Burton’s punu painting is intellectually rigorous, gloriously colorful, and compositionally dynamic.  It’s enough to make me weep to see such a strong entry from Paddy Japaljarri Stewart, and another oldie, Ben Holland, still transports me to the depth of interstellar space with each of his works.  I know he’s telling a goanna story, but I can’t help feeling somehow that I’m peering through the Hubble Telescope when I look at this painting.

While I’m thinking of cosmic disturbances, how about the power of the pair of entries from husband and wife Djambawa Marawili and Liyawaday Wirrpanda?  Both of these paintings resonate with transcendence, a common enough theme in Yolngu painting, but expressed here with a physical force that leaves me swaying in the slipstream.  (Try to catch them displayed vertically in the virtual tour to get a better sense of that, rather than in the horizontal orientation of the static web pages on the site.)  There’s a similar rush in Nyapanyapa Yunupingu’s painting of the Djulpan story, and I’m entranced by the tiny figures of the seven sisters daubed in amongst the stars.

Among the works on paper, I think I have a bias this year towards the non-traditional.  Even Ishmael Marika’s Sunset Tower, despite its use of clan designs, is more transformational than traditional.  I love the richness of color in Jodie Harris’s Disposable Days.  But if there’s one work I wish I could see in person this year, I think it is Michael Cook’s Segregation–The Tram.  I can’t tell whether it’s meant to be funny, but the synecdoche of the Queen and her corgi–especially in contrast to the dingo–just cracks me up.  I love it.  The poster on the back wall that says “Vote No — Keep Australia White” is not so funny, nor is the expression on the face of the artist’s mother.  This is a subtle, complex work, and I’d like to be able to study it more closely.

Distance also makes the 3D works the hardest to assess; the video clips on the website offer the necessary opportunity to view the works in the round, but even then the important ability to move between the whole and the part is lost when, like me, you can only experience these objects virtually.  I think part of the power of Nawilil’s prize-winner is attributable to its very simplicity, and I wish I could grasp the other works as fully.  Nonetheless, I find Rhonda Sharp’s Night Birds irresistible in their whimsy, while Buwathuy Munyarryun’s Dhukurrurru has  a hieratic mystery about it that is one part Egyptian, one part Lang’s Metropolis, and 100% Yolngu.

Nothing this year in the New Media category, although perhaps we could grant Zada an honorable mention for data mining a software application for the content of racebook. And of course, the new media event of the season was at the Sydney Biennale, Nyapanyapa’s Light Painting, which you can now glimpse, statically, on Roslyn Oxley’s website.  I’m not sure I’m disappointed.  Video, computer programming, and installation art have conquered too many biennales in the past twenty years for me to sigh over the lack of them at the NATSIAA.  Ishmael Marika’s Sunset Tower may owe a bit to cell-phones and Photoshop, but I suspect that it will be a while before the transfer of these technologies to a medium other than canvas and paper becomes viable.  And the marketing of film as an art object remains problematic even in New York City.  But I’m glad the encouragement to experiment is endorsed by the Award, and hope that a relative paucity of entrants will not deter the continuation of the category.

If you’ll excuse, I have to go check Facebook now.  (Well, seriously, there are plenty of great photos from the Darwin Aboriginal Art Fair and the National Indigenous Media Awards floating around there this weekend.  Here’s a winner from NIMA: East Journey, who were the closing act at last year’s NATSIAA ceremonies, snagged the music video award for “Ngarrpiya.”)

This entry was posted in Art and tagged Buku-Larrnggay Mulka, Exhibitions, NATSIAA. Bookmark the permalink.