The Tall Man of Palm Island

A few weeks ago, a boxful of DVD’s that I’d ordered from Australia arrived and, in the evenings after work, we settled down to watch the televised adaptation of Christos Tsiolkas’s The Slap.  I’d enjoyed the book immensely; I thought its fractured narrative structure that told a story through the perspectives of eight characters, each of whom was strikingly different in outlook from the others, was an effective variant on the classic Rashomon effect.  But as we worked our way through the eight episodes of the TV adaptation, I saw the story in quite a different light.  Although the televised version remained true to the focus on the individual players, I came away realizing that The Slap is really Hector’s story, that of a man caught in a web of conflicting loyalties and seasoned with his personal strengths and weaknesses.  The story cohered in a way that I hadn’t registered during my initial reading of the novel. 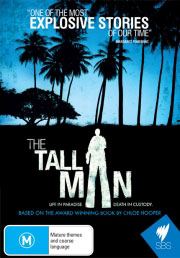 Last night we dipped back into the DVD box to watch The Tall Man, the SBS documentary directed by Tony Krawitz and based on Chloe Hooper’s 2008 chronicle of the aftermath of the death in custody of Cameron Doomadgee on Palm Island four years earlier.  Reduced to a story that could be told in ninety minutes, The Tall Man looks different.  In some ways the Doomadgee story gains a kind of coherence on video than it has not quite attained in any of the books written about it to date.  If Hector’s story of self-awareness and repentance (in The Slap) becomes stronger in the television adaptation and the character sketches of his family and friends recede in focus, so Krawitz’s tale becomes one in which the systemic disease of racism and an imbalance of power take the forefront.

Of course, the documentary gives a kind of life to this story of a man’s death that even the best writing necessarily finds hard to capture.  From the earliest scenes I found my mental picture of events being reshaped by the visual presentation of people and places.  The film’s opening scenes of the island community backgrounds a child’s voice describing the “tall man” of legend that haunts the hills of Palm Island, as Chloe Hooper described it in her original piece in The Monthly, put a mythic edge on the narrative that is to follow.  But almost immediately, we are taken into the very real milieu of the story: the street where Doomadgee’s arrest took place, and those events narrated by residents who were there when it happened; the police watch house and the low concrete step that Hurley claims he tripped on while wrestling the angry, restive young man towards the cell where he would soon die.  After years of reading (often in the Australian through the reporting of Tony Koch, who narrates a good bit of the story in the film), and rereading accounts of these events, I found myself startled by the ability to see these scenes in a way that had been impossible before.

So too, was the dramatic encounter with the Indigenous principals in the story, Tracey Twaddle, Roy Bramwell, Eric Doomadgee and all the rest, as speaking, breathing, weeping individuals.  This, of course, is the advantage and the power of the film over the page.  As faithfully as Hooper reported what has been said, and as effectively as she wove her story, the impact of faces, voices, and gestures in concert bring a different kind of realism to bear on the story.

And most particularly there is the power of condensation, or perhaps concentration, that comes from witnessing the narrative’s arc in the space of an hour an a half rather than over the course of the days it took me to read Hooper’s book, or the years during which I followed the unfolding of events.  We are taken swiftly through the arrest, the announcement of the inquest, the riots, the brutal police response, the subsequent inquiries, trials, and appeals.  There are few distractions in this telling of the tale (and those that exist, like the leitmotif of a horseman galloping the shores on the island, could profitably have been omitted).  Major episodes in the story have been left out: we see Lex Wooton’s face in the crowd before the riots that destroyed the watch house ignite, but he is not named, and his arrest, imprisonment, and silencing are not even referred to in the film.  (The silence on this subject, though, is itself suggestive, a kind of negative presence looming on the periphery if you are already familiar with the facts.)

One central presence in the story is also a kind of absence: Chris Hurley himself.  Understandably, his appearance in this documentary is limited to footage that already existed, most notably, the re-enactment of the events surrounding Doomadgee’s incarceration that was filmed the day after the arrest and death.  This is a kind of tiny documentary in itself and one whose exculpatory nature grows more and more evidently planned each time it is presented again inside the larger account.

On first viewing, it appears to be a simple reconstruction, but as Krawitz adds more and more detail the portrayal darkens.  The police video from that day after the death shows Hurley explaining his fall, checking to see if Doomadgee’s head was injured.  Then it shows Roy Bramwell re-enacted what he witnessed, partially obscured by some filing cabinets, and relating his claims that he saw Hurley’s elbow going up and down repeatedly as if pummeling Doomadgee while he lay on the floor.  It isn’t until late in the film that we learn that Hurley was seated in his office with a clear view of Bramwell’s re-enactment, a view that allowed him to offer an alternative explanation (that he was trying to lift Doomadgee off the floor, but Doomadgee’s shirt ripped, causing him to fall back, and Hurley to try to lift him again by the torn shirt).  Similarly, the care Hurley takes to demonstrate that Doomadgee suffered no head injury reflects the fact that, at the time this footage was shot, the day after the arrest, the real cause of Doomadgee’s death was still  unknown.  The importance of the fall and of Hurley’s alleged blows to the prone Doomadgee were still to be revealed.  When at the film’s end the assertion emerges of collusion among the police from the start of the investigation, these few minutes of video become a damning piece of documentary evidence in support of the claim.

Despite this,  Hurley does not come off as evil: he is not the malevolent, spectral tall man of Palm Island’s bush hills.  Murrandoo Yanner, the Indigenous activist who became Hurley’s friend during the latter’s assignment in Burketown prior to arriving on Palm, sees much good in him, but also recognizes a temper that lurks below the surface.  However, Hurley necessarily remains a cipher, silenced in his own way by the events, the legalities, the circumstances.  What we learn is that there is a story that can not, will not be told.

So what is it that does emerge from Krawitz’s telling in sharper outlines than before?

First of all, the character of Doomadgee himself.  Krawitz makes no attempt to conceal the dysfunctional nature of Palm Island and the behaviors that many in his audience will have no sympathy for.  That Doomadgee was drunk–and had been drinking all night while out hunting for mud crabs–is made clear from the first.  Likewise, Roy Bramwell’s drunkenness and the violence that led to him being at the police station and, ironically, to Hurley being on Dee Crescent and encountering Doomadgee there, are presented unapologetically.  But throughout the film, there is no one who has a bad word to say about Cameron Doomadgee.   Everyone admits he liked to get drunk, but everyone also points to his being happy-go-lucky; there’s no sense that he was a nasty or violent drunk.  He was fun to be with, and clearly devoted to Tracey and Eric.  But this portrait isn’t the result of a campaign to exonerate Doomadgee or to avoid speaking ill of the dead.  His character emerges almost in passing from a remark dropped here and there.

The sense of grief that pervades the Island, and this story, emerges forcefully in this film. The sorrow that permeates Doomadgee’s family.  The despair that is revealed by the suicides of his son Eric and of Patrick Bramwell, who lay unconscious in the cell with Doomadgee as he died.  Most surprising to me, however, and in a way emblematic, was the ravaged face of Erykah Kyle, who was the mayor of the community in 2004.  We see her in documentary footage from that year, reading out the findings of the inquest that detailed the horrific injuries Doomadgee suffered at the police watch house.  When we see her interviewed for this film years later, retelling parts of the story, she is barely recognizable, thinner, strained, burdened by the effort of bearing witness.

In the end, the story is one of the grossly unequal distribution of power.  Hurley remains on active duty; the Queensland Police continue to this day, despite overwhelming evidence to the contrary, to insist that Hurley and his comrades on the force are blameless, indeed that they are somehow the victims in all this.  The scenes in which the QPS mass like an army to protest the suggestion of wrongdoing by one of their own (see the image from the trailer below) are chilling in their evocation of the marshaling of massive force against a defenseless handful of Indigenous people–and against real justice.  The legal machinery, though it has pointed as clearly as possible to the evidence of collusion, distortion, and evasion, remains finally silent: its judgements can only be inferred from outcomes like the eventual reward of damages to Doomadgee’s family.

And that imbalance of power, sadly, still rests on deeply embedded racism.  Here in America we are confronting the same reluctance to investigate this structural inequality, the same assumption that the black man is to blame, the same failure of policing, as the details of Trayvon Martin’s death slowly surface.  The lack of police investigation into Martin’s death was buried for over a month, but it took only days after it came to light for the news to carry reports of Martin’s drug use and general delinquency.  Roy Bramwell’s evidence was suppressed in trial because he was unreliable, a convict, a basher.  Doomadgee died because he was drunk and disrespectful; at least that is what the police would like us to believe.  And the saddest part of the story is that there’s some truth to that assertion, for a straight line exists between a jibe on Dee Crescent and a death in custody an hour later.  But the rest of the story, Chris Hurley’s actions, remain shrouded in collusion and denial.  The truth, like innocence, is another victim.

This entry was posted in Communities, Film and tagged Palm Island. Bookmark the permalink.

1 Response to The Tall Man of Palm Island