Rip Rock: It’s Not About Hip-Hop 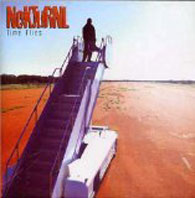 Earlier this week I was thinking about breaking the string of book reviews I’ve posted lately with something different when CAAMA came to the rescue by posting an old music video by my favorite post-apocalyptic, no-nonsense, mean-as-nails and sweetly lyrical band, NoKTuRNL.  Admittedly, there isn’t another band in that exact category.  But that’s one of the reasons that now, many years later, I still find myself loading their music up on the iPod to carry me to and from work on a pretty regular basis.

NoKTuRNL came out of Alice Springs in 1996, formed around the nucleus of frontman Craig T. and guitarist DaMieN.  Two years later they won Band of the Year at the Deadlys, a year before they even signed a recording contract, much less released a record.  They had made some spectacular television appearances, including a live broadcast from the Stompen Ground Festival in Broome and a pre-election-day interview and clip that featured them burning the Australian Flag and taking on Pauline Hanson’s One Nation movement.

They repeated their win two years later in 2000.  In February of that year they released their first EP Neva Mend, with a title song that was a manifesto of menace in the face of hatred and a declaration of artistic and musical independence in its lyrics and its musical stylings, a marriage of death metal and rap defiance.  The video (nominated for a Deadly itself) was scary even before 9/11 transformed our visions of tall buildings and smoke-filled streets and skies.

Their second EP, Unveiled, appeared in October 2000 and featured the track for  the video that CAAMA posted this week, “Same Old Song.”  Looping synth-strings, almost soulish strands, played off against an insistent thumping beat that gave the guys a platform for their lyrics.  The song is an anthem of modern misery, jumping line by line from racism to war, from violence to mental illness, from vulnerability to (once again) defiance: a manifesto of music’s power for the band’s members to create and sustain strength and sanity in the face of a cruel and insane world collapsing into ecological disaster.  It’s a lot to pack into three and a half minutes, but it doesn’t seem forced.

It’s no use runnin – Tectonic plates are worn
A child earthquake victim from the rubble torn
A radiation release to find a nuclear dawn!

Amidst all the terror and destruction, NoKTuRNL is trying to create a sort of beauty; the imagery of the video again ought to be terrifying but somehow I’m left more awed by the beauty of it, by the way the imagery gets woven into a hallucinatory and kaleidoscopic collection of television raster lines, trippy stop motion animation, and performance clips. It sounds grim, but there’s hope buried in the bluster.

The single “Haterz” came out in 2001 and the band went onto win the Deadly again in 2003 although it wasn’t until 2005 that Shock released NoKTuRNL’s first album, Time Flies.  A compilation CD, Unveiled, brought together tracks from the earlier EPs with some previously unreleased material including tunes like “New Era” that moves from thumping, shouting rhythms reminiscent of “Neva Mend” to smooth but insistent patterns marked by ringing guitars and spectral backing voices; another track, “Peace of Me,” proffers Middle Eastern melodies emanating from synthesized keyboards.  It’s all pretty amazing stuff, but perhaps to be expected from a band that casually cites Frank Zappa, King Crimson, Elton John, and KISS among its influences. 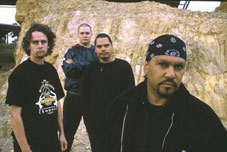 Time Flies is available from iTunes and is downloadable from Amazon as well.  The EPs and the compilation Unveiled are harder if not impossible to find.  The band’s website offers both, along with a limited edition demo and the CD singles of “Neva Mend” and “Haterz.”  The links for directly ordering these titles from the “Nok Shop” don’t seem to be working, but there’s an email address under “ContaKt” that stood me in good stead a couple of years ago.  While you’re there, check out some more videos in the “Music” section: they’re all a blast.

This entry was posted in Music and tagged NoKTuRNL. Bookmark the permalink.