Darwinians, mark your calendars.  Top Enders and outsiders, make your reservations.  Christmas is coming to town.  And you do not want to miss it this year.

On December 7, at the Chan Contemporary Art Space in Darwin’s CBD, Miyarrka Media will present the public premier of Christmas Birrimbirr (Christmas Spirit), a three-channel video work that explores a celebration of Christmas held in the remote community of Gapuwiyak.  Combining elements of Christian and Yolngu ceremony, this work of surpassing beauty is the result of a collaboration between community members led by performer, director and actor Paul Gurrumuruwuy, his late wife Fiona Y. Wanambi (who starred as Alinta in the first of the groundbreaking Women of the Sun films from the early 1980s), anthropologist and experimental media practitioner Jennifer Deger, and artist-filmmaker David Mackenzie.

During the build-up, as the wet season and the Christmas season approach, the skies over Arnhem Land are visited by wulma, the looming thunder clouds that presage life-giving rains.  From out of these towering formations issues the rumble of thunder; Yolngu have long heard the voices of the dead in that reverberating sound.  Experienced this way, the build-up, for the Yolngu, is a time of sadness and longing, a time of remembrance and mourning.  From mid-October, throughout the scattered communities of northeastern Arnhem Land, the sound of thunder mingles with repeated playings of Mariah Carey’s “All I Want for Christmas is You” or Dolly Parton and Kenny Roger’s “Christmas Without You” as Yolngu remember loved ones they have lost and wait for the emotional release and renewal that comes with the new year’s rains.  Christmas Birrimbirr chronicles this season of preparation and remembrance, culminating in a celebration that could take place nowhere else in the world.

I have been fortunate enough to see an early edit of Birrimbirr that preserves the three-channel presentation, but formatted for display on a single screen.  So what I have to say about this remarkable collaboration will vary somewhat from the final form of the work that will be shown in Darwin from December 7, both in content and presentation, but I am sure that the stunning, moving, emotional impact of the final work will be, if anything, only enhanced and magnified at the Chan Contemporary.

Birrimbirr opens with images of the wulma, simultaneously dark and brooding and glowing in brilliant illumination.  In early sequences, we are shown preparations around a gravesite in Gapuwiyak.  (The headstone reveals that it is that of Bangana Wunungmurra, Deger’s collaborator on the film Gularri, which was the subject of her 2006 monograph, Shimmering Screens: making media in an Aboriginal community, University of Minnesota Press.)  A woman rakes the deadfall from around the grave, raising clouds of dust; others twist bouquets of artificial flowers around it, or disentangle strings of colored lights.  Flags of many colors flap in the strong wind or hang limply in twilit silence.  The woman is singing the song of the orange-footed scrub fowl, who builds a nest of leaf litter; the heat produced by the decomposition of the organic material incubates the fowl’s eggs.  Her brilliantly colored dress, like those of other women working at the gravesite, ripples in the breeze like the flags that denote clan affiliation.  In a long shot, smoke from a fire billows up like the dust from the raking, like the clouds in the sky above.  Already, only minutes into the film, we are deep in a Yolngu visual universe of correspondences and metaphors, duality and complimentarity.  Death and life.

After a moment’s darkness in which all three screens go black, the scene shifts inside to preparations of a house for Christmas.  Tinseled garlands are being taped to walls; children dart about excitedly; assembled kin sport silvery star headbands and sing along to the ever-present Christmas music.  Photographs of three men, framed, are passed about and the surface of each lovingly caressed as they circulate from hand to hand.  Family members pose for a portrait holding one of the photographs in the center of the group.  Another of the pictures hangs on a wall, trimmed all about with a golden garland.  From a boombox we hear sung the words, “Today a child is born.”

The scene shifts again, as we see Gurrumuruwuy directing his family out bush, cutting down a pair of slender trees that will be stripped of their bark, drilled, and covered with silver-tipped plastic fir branches and shop-bought evergreen shoots.  Lights are draped on this skinny Christmas tree; a star is placed atop one as Christmas songs play on the makeshift public address system that is being set up.  Darkness falls and children dash about holding glowsticks or line up with flickering candles in their hands.  Santa Claus arrives, much to the delight of the well-behaved little ones who line up to shake his hand and hug him.  The camera pulls back to capture a panorama of the flashing lights of the Christmas tree and the candle-bearing children and adults assembled around the grave of Gurrumuruwuy’s brother before fading into a blackout.

The next morning (Christmas Day), a great feast is being prepared: hams are wrapped in tinfoil, a pot of stew simmers, paperbark is cut to cover a pit oven.  Small gifts are being wrapped in colorful paper.  Long tables have been set up to hold all the food.  Amidst a scene that could be taking place in the fellowship hall of any church in Christendom, men begin to cover their faces and torsos with the white clay of ceremony and yards of red cloth are cut to beskirt them to the sounds of “Feliz Navidad.” 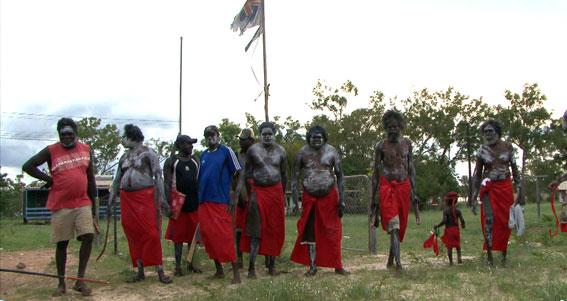 A songman taps his head to begin calling out the sacred names of waters; the men dance in from the edge of the cluster of houses.  The sound of clapsticks, the back and forth, high-stepping rhythms, the shouts, the swings, the sudden silence of Yolngu ritual unfold.  When the dance is complete, the gifts are unwrapped by a trio of young adults, two women and a man.  The gifts turn out to be the photographs of their fathers that we saw earlier, when the house was being decorated.  Each of these children, whose fathers have died over the past decade, stands with the photographs to be comforted by a line relatives.  Tears flow freely.  They‘re wiped aside, they emerge anew.  Old women fervently embrace the children and snatches of Gurrumuruwuy’s voice can be heard speaking in English: “sharing love,” “Christmas sprit,” “loved ones.”  Everyone settles down to the feast before darkness falls.  Once more, Santa Clause arrives, and in the darkness the dancing begins again, this time a moving joyful disco-mission inflected and yet still uniquely Yolngu swaying of bodies, little youngsters joining in with the weaving and swinging of arms, and occasional bursts of gymnastic excitement before the scene fades to black one last time.  The community has passed through the mourning into joy and rebirth.

This Yolngu Christmas bungul (ceremony) is a remarkable document of the power of Yolngu creativity: a profoundly affecting insight into Yolngu culture and its adaptations to modernity and Christianity.  A performance of Yolngu Christmas simultaneously for the camera, the community, and ultimately the gaze of strangers, it offers, in its creators’ words, “a powerfully moving glimpse into the pain, joy and resiliencies of contemporary Yolngu lives.”  It demonstrates how Yolngu and Balanda can come together to shape new meanings, to create “vitality and purpose” out of mourning and sadness as it allows us to experience the power and beauty of Christmas through Yolngu eyes.

[Christmas Birrrimbirr]  offers what its Yolngu directors call a “gift of grief”.  It has been made for art gallery audiences precisely so that people living lives far removed from Gapuwiyak might have their own relationships, families and culture enriched by the resonant, sometimes difficult, images and feelings on offer.

I can attest to the power.  Over the years, I have watched many films of Yolngu ceremony, stretching back in time as far as the remarkable images that Ian Dunlop captured of circumcisions and funerals forty years ago.  But I have never been so moved, so enraptured, so transported by a bungul as I have been by this one.  I am sure that is due in part to the associations of Christmas that I bring to its viewing.  The intensity of feeling is no doubt heightened by my awareness that this coming Christmas, as it will be celebrated in the Chan Space from December 7, marks the first season since the passing of co-director Fiona Y. Wanambi last February.   In a heartbreakingly fitting tribute, Miyarrk Media plans to augment this year’s celebration with a special opening bungul in the Chan Space where a Yolngu Christmas tree sculpture forest, photographs, and smaller video works will augment the three-screen video installation to infuse the Chan space with further layers of loss and love in what promises to be a startling intercultural encounter.

I will be here in America and won’t be able to partake of the Christmas spirit.  Please, dear readers, be there in my stead. 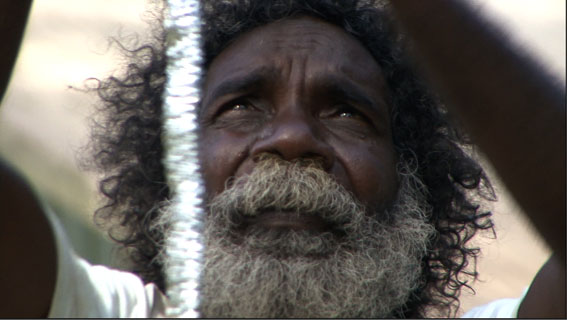 Christmas Birrimbirr opens at 6 p.m. on Wednesday, December 7 in the Chan Contemporary Art Space, Darwin, NT, opposite Parliament House, and runs through December 18.  An Artist Talk is scheduled for Saturday, December 10 from 12:30 to 1:30 p.m.  Miyarrk Media was founded in 2009 by Paul Gurumuruwuy, Fiona Y. Wanambi, Jennifer Deger, and David Mackenzie.  It operates under the auspices of Gapuwiyak Culture and Arts Aboriginal Corporation.  Thanks to Jen and David for the images.