Posted on February 2, 2008 by Will
On the morning of our second day in Arnhem Land, we landed in Ramingining for a visit with the folks of Bula’bula Arts. Curator Belinda Scott and manager Geoff Willetts-Bryants met us at the airport and brought us quickly back to headquarters in town. There our official host for the morning took over: current chairman of Bula’bula Arts Aboriginal Corporation, Richard Birrinbirrin (who’s also serving this year as chairman of the ANKAAA Executive Committee). 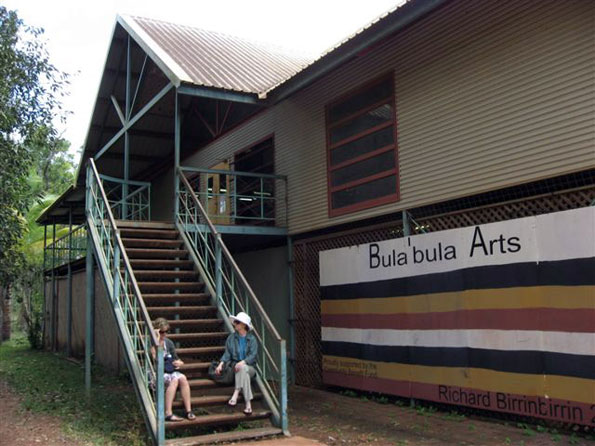 And so our first introduction to the art of Ramingining was this large painting by Birrinbirrin that adorns the exterior of the ground floor of the arts centre.

But one of the amazing things about visiting Bula’bula is the richness of the history you immediately find yourself in the midst of. This, after all, is the country where the work was done for the Aboriginal Memorial, the 200 ceremonial burial poles commissioned for the Bicentenary in 1988. It is the land that Donald Thomson made famous in his photographs of the 1930s and that the community, with the assistance of Rolf de Heer, then brought to global notice in 2006 with the release of Ten Canoes. It is the home of legendary artists like Philip Gudthaykudthay and Charlie Djurritjini and Dorothy Djukulul.

As we ascended the stairs to the main entrance of the centre on the first floor, we encountered some of that history right away in the form of two large panels representing the Dhuwa and Yirritja moieties. Like the arched ceiling of a European palace or cathedral, the entranceway to Bula’bula Arts prepares you for what waits within. 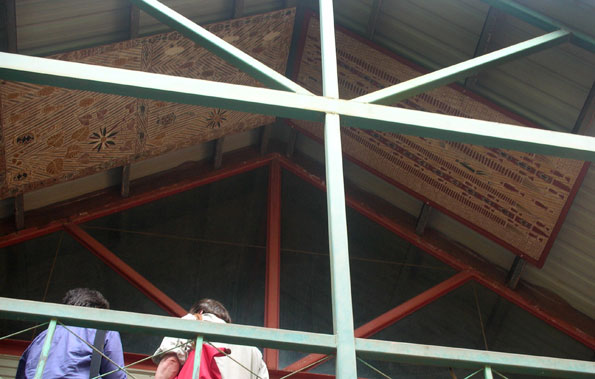 Yirritja and Dhuwa panels over the doorway to the arts centre

Lest I mislead you into thinking that this is museum to past glories, there is exciting work being undertaken. For instance, a new print workshop had just begun operations, led by Noel Doyle, who was profiled in the ANKAAA Arts Backbone last July (p. 5). On the day we were there Noel was working with Frances Rikili to produce the workshop’s first four-color cloth (an earlier black-and-white edition by Bobby Bununggurr was the initial effort).

Frances Rikili with the first run of her new cloth print

Inside the showroom at Bula’bula there’s an incredible mixture of new work on offer along with historic bark paintings that form the heart of the community’s archive. In the center of the room, a group of painted poles stand ready for sale. In my mind, though they carried me back to Canberra. 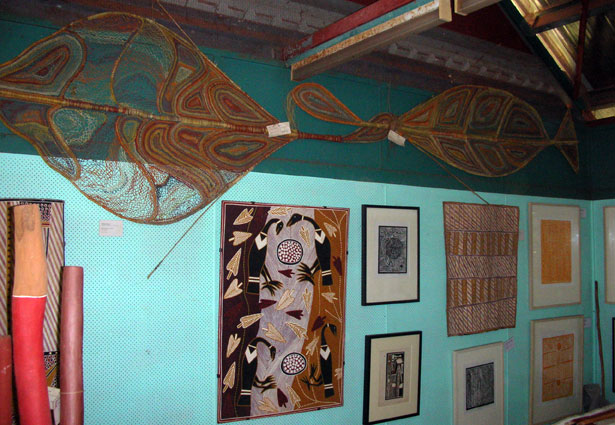 New fibre work hangs above bark paintings and prints illustrating the ownership of clan designs and stories from the Bula’bula archives.

Interspersed with the artworks on the wall are numerous photographs. Some of these pictures are portraits of the artists. But on second look, you realize that some of these portraits of artists like Gudthaykudthay, Birrinbirrin, and Peter Minygululu are actually stills from Ten Canoes. You look closer and you realize that some of these group photos come in pairs: an original Thomson print with the scene as recreated in the film. It’s a dizzying glimpse of the Dreamtime.

Artwork of the Daymirringu clan, historic photos, and film stills. Note the portrait of Birrinbirrin in the upper right

In the top row, Donald thomson’s photographs of the platforn on which men camped during the goose-egg hunts; canoeists in the Arafura Swamp; and a women’s camp. Below, the same scenes as recreated in Ten Canoes

Perhaps the most amazing adventure of the day belonged to Margo, who engaged Gudthaykudthay in conversation, hoping to have him explain the iconography of the painting he had completed for her. Gudthaykudthay’s English is almost non-existent, so he set about explaining the story by borrowing Margo’s pen and notebook. By the time he was done, the story was still a bit unclear, but Margo had a spontaneous pen-and-ink drawing from the master’s hand!

The view across part of Raminging from the art centre

This entry was posted in Art, Communities, In Australia and tagged Austrade Tour, Bula'Bula Arts, Ramingining. Bookmark the permalink.