We arrived at the Gove Airport in the wake of a sudden downpour that left the runways and the red earth puddled and the air feeling like the Wet wasn’t quite gone yet. On the way to the Buku-Larrnggay Mulka Centre, coordinator Andrew Blake explained that the rains were lasting a bit longer this year than usual. Mostly the dry weather has settled in but every now and then…. Well, this was the Top End, but luckily the temperature was still in the 20s.

While driving us to Yirrkala, Andrew also explained the meaning of the art centre’s name. We were now in Miwatj country: land of the sunrise. Buku means face, but it also means mind. Larrnggay is the sun in Yolngu-matha. Mulka is a verb that means to touch. It also refers to a sacred public ceremony. Buku-mulka is an idiomatic expression that means to reach the end or climax. In my end is my beginning, said T. S. Eliot.

So, Buku-Larrnggay Mulka. The touch of the sun on one’s face. Holding the sunrise and all it suggests in your mind. A ceremony, a place for keeping the culture of the Yolngu. It wasn’t terribly far from here, less than a hundred kilometers, that the Wagilag Sisters, who had paddled in a canoe from the eastern island of Bralgu, first set foot on what we now know as Arnhem Land and began their journey across to the west, naming the land, giving birth to the Yolngu clans, leaving the languages. Bralgu in the east, the place where the spirits of the dead return. In my beginning is my end. 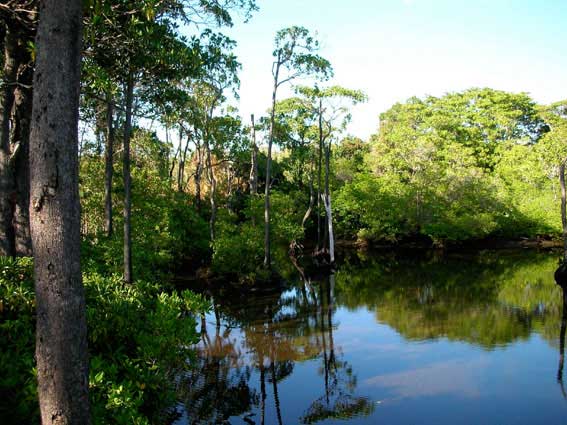 Jarringly, Andrew pointed to a long structure that we were passing just then, stretching as far as the eye could see to either side of the road. As we sped past, he explained that it was a section of a twenty-kilometer long conveyor belt that carried bauxite ore back to Nhulunbuy. In the midst of this humid jungle that looked so nearly primeval, the road that carried us (not primeval at all) was bisected by the signs of the mining that brought an end to the Aboriginal possession of Arnhem Land, prompted the Yirrkala Bark Petition(1, 2)and in turn gave birth to the modern land rights movement. We’d barely even arrived and my head was already spinning with the back-and-forth rhythms of the country.

Part of the bauxite processing operations near Nhulunbuy

Soon enough we were piling out of the troopie at the art centre. Things had changed since I was here two years ago. A new addition was nearly completed, which will house the centre’s museum.

The impact of this change was immediately evident as we passed through the reception area and into the space that had formerly been filled with exhibits of Yolngu history and bark paintings by the masters of forty years ago. Now the space was teeming with new work, racks of bark paintings tilted against the walls, and larrakitj towering down the central aisle and laid out in rows. It was a stunning richness, almost too much to take in.

Margo and Joel inspect the new work on offer

We headed down to see the Yirrkala Church Panels, which are housed in a tiny sanctuary reached by either of two semi-spiral stairways. Four meters tall, one illustrating the creation stories of the Dhuwa moiety, the Wagilag sisters, the other Barama and the stories of the Yirritja moiety. Andrew said they are the most important Australian art in existence, and it’s not hard to believe that when you’re standing in front of them. You can see reproductions of them in books, most comprehensively in Ann Wells’s This Their Dreaming (University of Queensland Press, 1972), but nothing really prepares you for the surprise or the solemnity of the experience itself. It’s an experience comparable only to two others in my memory: reaching Salisbury Plain and seeing Stonehenge in the distance, and turning through the Propylea for the first glimpse of the Parthenon, like this small room, sites where human ingenuity meets the ineffable.

Back upstairs, I ran into Randin Graves, Buku’s yidaki coordinator who has also been helping out at the Arts Centre. Randin has spent years in Yirrkala studying with Yolngu masters, working on recordings, and generally spreading the gospel of the drone pipe in ways that affirm its connection to Yolngu culture and Yolngu law. He has assembled the best online information site about the instrument I’ve ever seen (and you know there are hundreds of them), Yidakiwuy Dhawu Miwatjngurunydka (Didjeridu Story from Far Northeast Arnhem Land). It covers not simply buying and playing yidaki, but aspects of relevant law and culture, discussions of thorny issues like women and the yidaki, and links to “useful websites owned or made with Yolngu.” This last category covers topics ranging from Yothu Yindi to land managment and the Garma Festival to Arnhem weavers.

The sheer richness of the art on offer, qualitatively as well as quantitatively, made the next couple of hours fly past. And then, inevitably, came the time to sort out purchases, payment details, and shipping arrangements. Eventually I wandered out of the Arts Centre for a walk past the Mission Church across the road, and down towards Yirrkala Creek, whose supply of freshwater and sheltered location led the Methodists to choose this cove for their settlement back in the 1930s.

The Mission Church at Yirrkala

Walking back from the shore of the bay, we encountered a group of young boys near the football oval, riding their bicycles in the dusk, popping wheelies, and like all the young people we met in communities across Arnhem Land, eager for a chance to chat with the balanda visitors.

We spent the night at the Gove Motel, a comfortable, low-frills establishment, and had dinner at the Gove Yacht Club. After an afternoon immersed in the art of the Yolngu, it was surreal to be dining out on the darkness of the lawn with the lights of the bauxite processing plant glittering across the water. At times like this I’m always tempted to ponder contradictions and cognitive dissonance. But I find it more useful in the end to remind myself of Djambawa Marawili’s injunction: “Your knowledge, your education, your background, we are using it. … OK and in the same way you must learn…”

The central courtyard at Buku-Larrnggay Mulka

This entry was posted in Art, Communities, In Australia and tagged Austrade Tour, Buku-Larrnggay Mulka, Yirrkala. Bookmark the permalink.