Juno Gemes and the Kluge-Ruhe

This past weekend photographer Juno Gemes and her partner, the celebrated Australian poet Robert Adamson, were in Charlottesville, VA in conjunction with an exhibition at theKluge-Ruhe Aboriginal Art Museum of works selected from Proof: Portraits from the Movement 1978-2003, which was originally organized and presented at the National Portrait Gallery in Canberra in 2003. 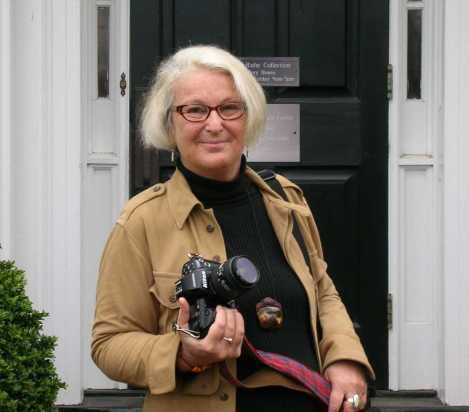 Proof was conceived by Andrew Sayers and Gemes for the opening of the new building of the National Portrait Gallery at Commonwealth Place in 2003. It is a retrospective selection of Gemes’s work over twenty-five years and combines posed portraits of individuals and groups as well as photographs from Gemes’s long career of documenting the history of the Aboriginal civil rights movement and the various Aboriginal communities where she has spent time. Wandjuk Marika, Marcia Langton, Jimmy Little, Yvonne Goolagong, and Kumantjayi Perkins were among her subjects in the first category. The handback ceremonies at Uluru and the departure of Gough Whitlam and members of the National Aboriginal Congress in 1981 to lobby African nations to boycott the Commonwealth Games (in support of Land Rights) are among the second, while the third comprises subjects as diverse as children in the Block at Redfern and a family camped on the beach at Mornington Island, awaiting the annual return of the dunna and wanna fish. In addition to the sixty-nine black and white prints, a DVD slide show of color photography covering the same subjects is being shown in the exhibition.

On April 7, Gemes lectured at the Kluge-Ruhe to the accompaniment of a spectacular sound-and-light show courtesy of the unsettled spring weather we’re having in the eastern United States at the moment. The comments that follow are drawn from the notes I took of her speech.

Gemes’s involvement with photographing Aboriginal people began during the period of her residence at The Yellow House in Sydney. She and experimental film-maker Mick Glasheen set out in 1969 to find the traditional custodians of Uluru and to make a film that tried to present the stories of the site in a way that would both be accessible to white audiences as well as provide a visual interpretation for the owners themselves. She noted with a laugh that while other members of the Yellow House were turning its rooms into experimental artworks, she and Glasheen contributed large scale maps of Central Australia to its avant-garde mixture.

Gemes recalled that, at this time, images of Aboriginal people were almost completely absent from the media in Australia, and she wondered how the two nations of Australia could ever come to know one another when they couldn’t, by and large, even see one another. Her photography, she hoped, would be a way of introducing black culture to white Australia. Gemes, who was born in Hungary and whose family fled that country when she was only five years old, noted that there is no country on earth that does not have a conflict history, but that Australia seems to have a particularly hard time believing that truth of itself.

And so, in 1969, she hitchhiked out to Central Australia several days in advance of Glasheen and the equipment that they would need to make their film. She arrived at Ebenezer Downs unannounced and sat down with her swag under a tree wondering how she would make the initial contact. She waited until sundown, and then stood up, at which point a group of children came running over from the Aboriginal camp and led her back by the hand. The elders, it seemed, somehow knew of their impending arrival, welcomed her that night, and provided support and assistance over the next six months of filming. When she and Glasheen wanted to film at the top of Uluru, the elders “sang” her so that she could travel safely to the crest, where women were traditionally prohibited. When the anangu saw the stores of dry brown rice and tinned food the crew had brought out, they took her and Glasheen out hunting for kangaroo. Shooting schedules for the film became irrelevant.

Along the way, Gemes said, she became aware of the high degree of visual literacy among Aboriginal people, and how they were constantly “reading the country.” She began to ask the people what they wanted to make pictures of, and began the approach to photography as collaboration that characterizes much of the work in Proof. She came to realize the multiple uses of such photographs. Not only could they inform that larger Australian population about the lives of contemporary Aboriginal people, they could provide the people themselves with a new way of capturing their history, passing down not just traditional knowledge, as anthropological photography has often been used to do, but recording current events for future generations, as her recent series of photographs of the Concert for TJ Hickey in Redfern has done.

When she returned from Central Australia, Gemes began to research the history of photography of Aboriginal people, going back as far as Spencer and Gillen’s work in the late nineteenth century. Later in the evening, over dinner at a local Charlottesville restaurant with Kluge-Ruhe curator Margo Smith, Gemes expanded on this theme. She noted that not only are the photographs important for the record of ceremonies and camp life contained in them, but for what they tell us about the relationship of the people to both Baldwin and Spencer. She made the keen observation that in many of the formal pictures included in The Photographs of Baldwin Spencer (Miegunyah Press, 2005) one can see the subjects looking intently, not at the camera held by Spencer, but off to the side where Gillen, their friend and long-time associate, must have been standing.

After her all too brief introductory remarks at Friday night’s lecture, Gemes took the audience through a digital slide show of the works from Proof, often quickly sketching the story behind a particular shot, or explaining for her American audience the significance of the establishment of the Tent Embassy in 1972, for example.

The following morning Gemes offered a tour of the photographs on display at the Kluge-Ruhe with more extensive commentary, and gave us a look at a new body of work calledTerra Nova. In this series she has been collaborating with a pair of actors trained in the Japanese butoh tradition to present photographic images that attempt to dramatize the lives of early white settlers in Australia. The actors have costumed themselves as early Australian archetypes–the runaway convict, the missionary’s daughter–and Gemes has tried to capture the relationship of these often poorly documented lives to the landscape of their new homes. In several of the early sequences in the series, the white butohmakeup evokes an eerie echo of ochred indigenes, while in later shots, the characters, trying to survive in the bush, blend into the dazzle of sun on a waterhole or hide in the trunk of a tree burnt out by a bushfire, to the point of almost disappearing into the landscape.

Following the morning’s gallery talk, Harvey and I had the good fortune to repair with Juno to the cottage on the Kluge-Ruhe’s grounds where she and Robert were staying for the weekend. Adamson and Gemes are on a multi-city tour of the United States in support of his first North American publication, The Goldfinches of Baghdad (Flood Editions, 2006). I had spent the previous week reading Adamson’s remarkable autobiography, Inside Out, which chronicles his life to the point of the publication of his first volume of poetry in 1970, and is an extraordinary reading experience, highly recommended. (Adamson and Gemes have collaborated on The Language of Oysters (Fine Art Publishing, 1997), which combines Adamson’s poems and Gemes’s photographs of life on the Hawkesbury River.) We argued over Joseph Campbell’s interpretation of Aboriginal initiation rituals (too severely Jungian to be worth much in my view), traded stories of Mornington Island, and discussed the influence of George Bush on John Howard. We were several hours late leaving Charlottesville for our return to Chapel Hill, and I only wish we could have prolonged our visit with them even further. 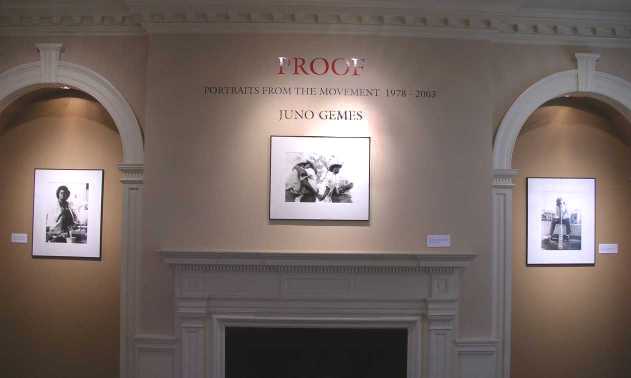 Installation shot of Proof: Photographs from the Movement 1978-2003 at the Kluge-Ruhe Aboriginal Art Museum, Charlottesville, VA, April 8 2006. To the left is a portrait of Thancoupie, to the right, Wandjuk Marika. In the center, an elder from Aurukun arrives, after long negotiations, for a ceremony on Mornington Island in 1978.

Proof will be at the Kluge-Ruhe through April 29, 2006. As part of the North American tour, Gemes will speak and show the slides from the exhibition at the Center for Media, Culture and History of New York University on April 19. The exhibition then returns to Australia where it will be on view at the Wollongong City Art Gallery (20 May – 30 July 2006) and at the Monash Gallery of Art, Wheelers Hill, Vic. (25 May – 22 July 2007).

This entry was posted in Art and tagged Kluge-Ruhe. Bookmark the permalink.

1 Response to Juno Gemes and the Kluge-Ruhe